6 elements to discover the origin and development of Medieval drama

"As Christian Church grew in power, its opposition to the stage became more effective. Plays were prohibited and actors proscribed in city after city throughout the Roman Empire" (A History of English Literature, William Vaughn Moody, chapter 5)

Well before the Norman conquest, while the Roman empire was dissolving and the Christian Church was growing in power, the Roman drama was proscribed. The demand for spectacles did not decrease, though. People attended to performances on market days (jugglers, minstrels) and at festival occasions (country folk plays, which contributed to the formation of traditional figures such as Robin Hood, maid Marian, the Green Dragon). Pageants were also organized near the city gate to welcome the official visit of the King or of people of rank. Pageants were pantomimes which involved traditional allegorical figures, i.e. they were spectacular displays with an elaborate scenic background.

Many scholars surmise it is from the regular service of the mass that the medieval drama emerged. The mass was conducted in a language most of the people could not understand: Latin. Moreover their knowledge of the Bible was quite superficial. For these reasons music and charts were used to underline great part of the service. Painted rolls picturing the principal events of the Bible stories were also displayed since most of the people could not read.

An example of pageant by Oscar Kuehn [Public domain]

Around the 11th century the services started being dramatized. At the beginning very few additions were made. Then episodes from Christ's life were performed in which the priests covered all the roles. When more episodes were added and more people took part in these Liturgical Plays (in Latin), the churches became too small to contain them all. The compositions were therefore displaced to the churchyard, later to the market places or the city streets.

In Europe the plays which dealt with subjects taken from the Bible were called Mystery plays while the plays which told the lives of the saints were usually called Morality plays. This distinction did not apply to English Liturgical plays which were currently called Miracle plays.

By the 12th century the roles, formerly held by the priests, were taken over by laymen. When the priests ceased organizing the performances, the trade guilds took charge of them. Drama was still liturgical, but the plays were now performed in vernacular.

The greatest stimulus to the transformation from liturgical to non liturgical drama was the institution of the summer feast of Corpus Christi in 1311. On that occasion the guilds used to present a series of plays about the Christian story. Fear of death was the main theme.

By the 14th century miracle plays were so popular that they were performed in almost every large town. They were arranged in sequences or cycles and could last several days. Each guild assumed entire charge of its own particular play.

The Coventry cycle (of 42 plays)

The Wakefield cycle (of 31 plays)

The aforementioned four cycles have come down to us complete. These religious performances have reached their greatest popularity between the 14th and 15th centuries but continued to be represented until the sixteenth century. 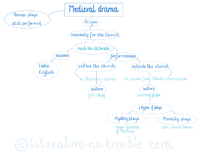 LnT This website usually supplies learning tools. In this case: