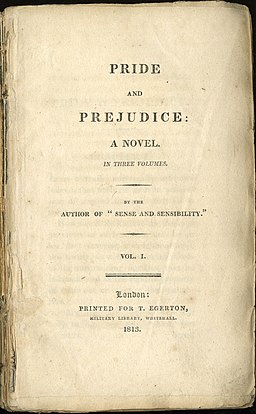 The title, the circumstances of publication, the genre, the structure, the plot, the setting in time, the setting in place, and the narrative techniques will be the focus of this presentation.

Jane Austen's work remained anonymous during her lifetime because writing was considered a manly activity at the time.

Jane Austen did not sign her novels, but instead indicated authorship on the title page with the simple phrase "by a lady." It was her attempt to overcome a social prejudice.

Only after her death did her brother Henry identify her as the author by including an autobiographical note.

The novel's first version, titled "First Impressions," was written in epistolary form. There are 44 letters mentioned in "Pride and Prejudice," and the novel contains references to "regular and frequent" correspondence between Elizabeth and Charlotte Lucas, as well as Elizabeth and Jane and Mrs. Gardiner.

The first title only describes a portion of the novel, the beginning, when the characters form their first impressions of one another at the ball. Elizabeth, the female protagonist, believes Mr. Darcy, the male protagonist, is too proud. According to Mr. Darcy, Elizabeth "is not handsome enough to tempt him." Their first impression is so negative that it breeds hatred.

The title "Pride and Prejudice" encompasses the entire novel, from the first impressions to the climax, which is Elizabeth's changing opinions and Darcy's proposal.

The publisher is most likely responsible for the change from "First Impressions" to "Pride and Prejudice." To replicate the success of "Sense and Sensibility," he presumably asked Jane Austen to stick to the formula "noun and noun" plus alliteration.

The phrase "Pride and Prejudice" comes from Francis Burnel's novel "Cecilia." Francis Burnel was a well-known author of the time and a favorite of Jane Austen.

The title "First Impressions" invites readers to view the story through the characters' eyes. It is up to the readers to figure out who is who with the title "Pride and Prejudice." The narrator is the readers' best friend.

The title "First Impressions" invites readers to view the story through the characters' eyes. The perspective shifts with the title "Pride and Prejudice," and readers are challenged to figure out who is who. Because he knows who is full of pride and who is full of prejudice, the narrator becomes the readers' best friend. The readers are asked to enter the characters' minds and discover how they make decisions and what their system of values is.

"Pride and Prejudice" is a novel of manners. A novel of manners focuses on the social customs, the system of values, the manners, the conventions, and the habits of a specific social class at a specific time and place. These characteristics are described in great detail and accuracy.

This genre was popular in the 18th century. Austen uses it to put her characters under the microscope, allowing readers to not only observe their qualities and flaws, but also discover their nature through their interactions. As a result, we can say that Jane Austen was interested in more than just manners, she focused on how people revealed themselves through them.

Jane Austen preferred to limit herself to small-scale family or village gatherings, with occasional trips to Bath or London.

The novel omits major contemporary events in England and Europe (the aftermath of the French Revolution, the Napoleonic Wars, social unrest, and the rise of the working class). Under the pretext of marriage research, novels of manners in general and "Pride and Prejudice" show how economic factors made gentle women's lives heavily dependent on making good marriages in an age when they couldn't get a degree or work.

Austen was not an innovator, but she did perfect the novel of manners.

The family Bennett and the other characters are introduced to the readers in the first volume and begin interacting. Bennett's family has five daughters, none of whom has a dowry (which might appeal to a possible future husband). They also have another issue to deal with: the Bennetts' property is entailed. It is a legal term that means the property can only be inherited by male heirs.

So the Bennetts have five daughters, all of whom are single and not wealthy. Three interesting young men appear: Jane falls in love with Mr. Bingley, Elizabeth dislikes Mr. Darcy, and Lydia, the youngest daughter, finds Mr. Wickham very interesting.

Mr. Darcy falls in love with Elizabeth in volume two, despite her vulgar family. She rejects him because he caused Mr. Bingley and Jane's breakup. Mr. Darcy explains why she is incorrect in a letter. Things appear to be settling down when news of Lydia's elopement with Mr. Wickham arrives. This puts at risk everyone's reputation.

The plot is set during Austen's lifetime. The events in this novel take place over the course of about two years.

In "Pride and Prejudice," owning land is equivalent to owning money.

There are four places to consider, which can be divided into two categories: temporary homes and permanent homes.

Let's take a look at the temporary accommodations. The Bennetts' home can be considered a temporary residence because the property is encumbered and the family will be unable to live there after Mr. Bennett's death. Mr. Collins, the nearest Bennetts male heir, will inherit the property. Netherfield Park is Mr. Bingley's temporary estate. His decision to rent the estate demonstrates that he is wealthy enough to pay the rent, but he will not stay forever.

Rosings and Pemberley are permanent locations. Rosings and Pemberley are both very natural places that have not been tainted by bad taste. Lady Catherine de Bourgh's estate is Rosings. There, Elizabeth and Darcy meet, and they are surrounded by nature. This reflects the Romantic era in which the novel was written. One of the most common characteristics of Romanticism is an experience of sublimity through a connection with nature. The two characters are exposed to nature while in Rosings. Darcy can then understand and accept his intellectual and physical attraction to Elizabeth. Elizabeth is not yet on the same page because she is still angry at Darcy for separating Mr. Bingley and Jane. The idea of falling in love with him never occurs to her.

Elizabeth will realize her feelings for Darcy only when she sees him at Pemberley. Elizabeth's initial impression of the house is as follows: "a large, attractive tone building [...] with no artificial appearance She has never seen a place where nature has done more or where natural beauty has been so subtly offset by an odd taste ". This quote links the house to Darcy's natural characteristics. Pemberley is possibly the only place Darcy can be himself without worrying about how others perceive him. Pemberley's absolute beauty is a physical representation of Darcy's beauty. Darcy and Elizabeth's relationship evolves as the setting becomes warmer and more intimate.

Jane Austen also uses the setting to represent the progression of the characters' relationship.

b) Elizabeth and Darcy meet again, this time at Rosings. They meet in nature. They are exposed to the magnificence and beauty of nature. Darcy accepts his intellectual and physical attraction to Elizabeth.

We will discuss the use of dialogue, irony, and a happy ending in this section.

Jane Austen provided direct access to the characters' thoughts and words without the need to directly quote or comment on them. Her experimental technique focused on what she was most interested in: the psychology of her characters. Austen's novels contained a careful examination of the characters' psychology. Rather than long narratives or scenic descriptions, she relied on dialogue (both direct and indirect), with each character having their own distinct voice. This enabled the author to delve into their inner motivations. Austen's interest in the inner lives of her characters may be seen as another aspect of her belonging to the romantic era.

Irony is used to highlight social hypocrisy, criticize the portrayal of women in 18th-century sentimental and Gothic novels, and expose the contradictions of reality and social conventions.

Austen's novels are known for their happy endings, which usually coincide with the marriage of the story's two protagonists.

The happy ending was the culmination of a series of difficult events that forced her characters, particularly the female heroines, to confront prejudice, social conventions, and misunderstandings. In this sense, marriage was both a personal decision and the culmination of the characters' personal growth and maturity.